for legal documents submitted to a European Court/Government department/University from English for continental Europe:

Which countries require a Sworn translation?

European countries, whose laws have been reformed by the 'Napoleonic Code'.

A sworn translator acts as a Government/court translator, so the translated document is a legal document in its own right. Some countries require this (Europe) and some only certified translations (Anglophile countires). These translators are regulated by an appropriate Government department (Ministry of Justice) or court (Regional/Appeal courts).

Any official document from a government/organisation or company that will be used in a legal context in Continental Europe:

Any document (passport, marriage certificate, will, police report, insurance documents, university degree, contract with a foriegn company, etc..) that is presented to any department within the British Government has to be translated into English by a 'certified translator'. For it to be legally recognised it has to bear the signature, contact details and qualifications/membership number of that certified translator.

A sworn translation is:

Any official document from a government/organisation or company that will be used in a legal context in Continental Europe:

for Portugal and Russia.

How much will it cost?

From £95 for a legal document. Use our translation quote form top right to get a price.

Use our submit form at the bottom, so you can receive a detailed quote by email. Response within 3 hours.

We can receive a scanned copy of your document. Normally the Sworn translator has to see the original document as they have to check the validity of it and attached the translation to the document. The majority of countries now accept scanned copies, so your original document won't get lost in the post. The Sworn translation can only be delivered as a hard copy (via mail or courier).

Sworn and Certified translation in Europe

Use the map of Europe below to find out whether you need a certified or sworn translation for your document: 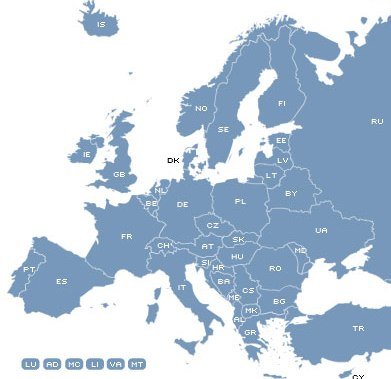 Send us your document - [email protected]

Your text has been sent to Exigo translations.

We have received your text and are in the process of confirming the online quote. This is within 3 hours, normally 30 minutes. Once confirmed, you will receive an email from one of our Account Managers who will be your point of contact.

confirming quote and go ahead

If you are still happy with the quote which is confirmed by us, give us the go ahead and we will start.

If you are a business, you have the option to pay within 30 days of receiving an invoice which is sent along with the translation

individuals have to prepay before we can proceed.

Sorry there was an error sending your form.